Real archaeological projects in Greece go on field trips. Lots and lots of field trips. This involves waking up earlier than we want to on the weekend (or on religious holidays), driving in caravans of small rental cars that can’t both run the AC and go up mountainous roads easily, getting lost, taking the wrong turn, doing a crazy three-point turn, then finally reaching the destination, traipsing through overgrown archaeological sites that are seldom visited but extremely important, and standing around in the sun while one person talks. Then we scramble over the site, get back in the cars, and start all over again.

Our normal time for field trips is Saturday morning. That gives all of us Saturday afternoon and most of Sunday to do some paperwork, go to the beach, and recover from the week. (Different members of the project do different proportions of these activities; I haven’t been to the beach yet, unfortunately). So this Saturday was our first field trip. We also went on a field trip today (Monday), because it is a religious holiday and we can’t work without our friendly supervisor from the local archaeological office. 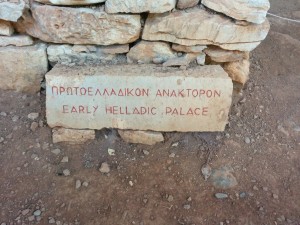 On Saturday, we stayed local. First we went to the site of Lerna, famous for its Early Bronze Age corridor house, commonly known as the House of Tiles but as an “Early Helladic palace” on the on-site signs (left). Lerna allowed us to show the students what saddle querns look like — there’s a whole stack of them near the House of Tiles — and to introduce them to the Early Bronze Age, and at a site that is almost literally spitting distance from where we eat dinner every night. 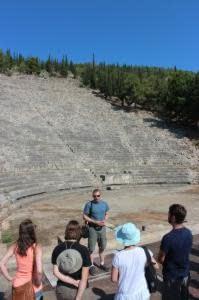 Next was the theater of Argos (right), where Scott ably summarized a millennium of Argive history and archaeology, followed by a tour of the agora of Argos. Unfortunately we then made the decision to go to the Larisa (the acropolis of Argos) through downtown Argos, which was at the time holding its laiki (farmer’s market). That was a bad decision. Stuck in traffic, I convinced Bill to jump out of the car to buy donuts at a local shop, but at that point traffic starting moving quickly enough that our donut plan was thwarted.

Next, we hit the Larisa and the Aspis, the two acropoleis of Argos (Livy 34.25: nam duas [arces] habent Argi). From the Larisa we had beautiful views of the Argolid: 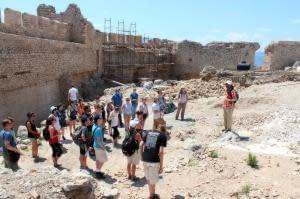 Here, Bill briefly reviewed the history of post-Roman Argos, picking up where Scott left off. (Notice that we are all standing in the sun). Conveniently, a Byzantine chapel formed the backdrop to his talk. 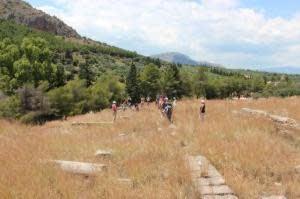 We ended the day on the Aspis, where Bill got really excited when he started talking about the early Christian basilica (left) next to the sanctuary of Apollo Pythios. 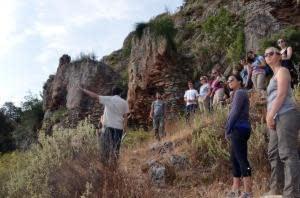 Monday we headed north and into the mountains. First we hit the remains of the Hadrianic aqueduct that brought water from Stymphalos to Corinth. There are seven arches just outside the village of Gymno, where I presented a short report summarizing the high points of the excellent article on the aqueduct by Yannis Lolos. (That part of the trip involved crazy three-point turns and people getting lost, which was mostly my fault).

From Gymno, we proceeded to Aidonia, the site of an important Mycenaean cemetery with a controversial past. Fortunately, we ran into Kim Shelton, who’s beginning a project to salvage the rest of the cemetery, which is now being looted (again). After a quick tour of the site, we moved onto the main show: Stymphalos.

Here, Sarah presented on the history and archaeology of the city. (Like WARP, the Stymphalos excavations are a project of the Canadian Institute in Greece). Sarah is herself a veteran of the excavations, and although back then (in 1999) she considered herself a prehistorian, she’s since become an expert on the Hellenistic period in the northeastern Peloponnese: so Stymphalos is now squarely in her wheelhouse!

We then went to the Cistercian monastery of Zaraka (below), where Bill presented on the architecture of the monastery and the history of the Frankish Peloponnese.

From Stymphalos, we drove back home via Nemea, past the Ayia Sotira excavations in which I participated as an excavation supervisor. I had hoped that we could visit the tower above Kephalovryso and the fortification walls of ancient Alea, but alas, time is limited. Next week: Tiryns and Nafplio!