It is almost inevitable. People invite me to join survey projects hoping that I can become a valued contributor to a well-ordered field season. Before long, however, I am sent off into the field as the “Extensive Team”.

Most intensive survey projects have a team responsible for exploring areas not suitable for intensive survey methods. These tend to be areas overgrown with vegetation, steep slopes, or marginal landscapes unlikely to support the kind of sustained human activities that tend to produce survey assemblages. The extensive team also serves as a good way to remove annoying people – like me – from regular contact with field walkers and staff. In my experience, extensive survey is practically defined as “survey of fields not near other people on the project.” That being said, I take my work seriously. I dutifully map areas onto a 1:5000 map and take detailed notes.

Sometimes I find cool stuff in extensive survey (and this generally alarms people), but most of time I find spiky maquis, overgrown fields, goat poo, scree, and social isolation.

So last week on the Western Argolid Regional Project where I serve as Assistant to the Directors, I was asked to take on Extensive Survey duties. Usually it takes a few weeks on a project to be “promoted” to the Extensive Team, but here at WARP everything takes less time.

Despite the exile from all human contact, I find the Extensive Team a good chance to think. Today for example, I visited the remains of a well-appointed seasonal house or kalyvi near the village of Lyrkeia. The little house had lost its roof, but it was well-built.

Its two court yards were clearly defined and carefully constructed of slightly shaped field stones. The cypress trees were a nice touch. 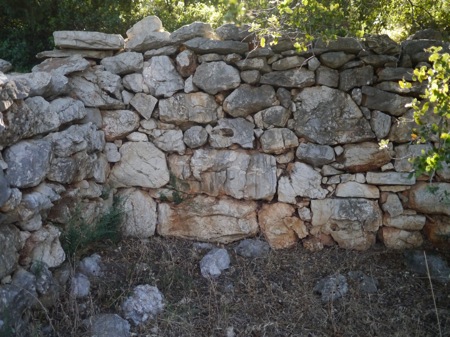 Nearby, there are some beautiful terrace walls. It is well know that the team from the Argolid finished third in the International Terrace Building Competition held in Bern, Switzerland in 1928. A possibly apocryphal story holds that they would have finished higher had the Greek state appropriated sufficient funds to ship over 10 tons of local, Argolidic limestone to Switzerland for the Terrace Building Finals. Supposedly, Venizelos favored a Cretan team who finish first in the Greek Terrace Championship, but had been disqualified on a technicality. As a sign of support for Venizelos, the newly formed “five parties” coalition refused to support the shipment of stone for Greek team from the Argolid, and this cost them a better finish in Bern.

Whatever the case, the reputation of terrace builders from the Argolid was well deserved: 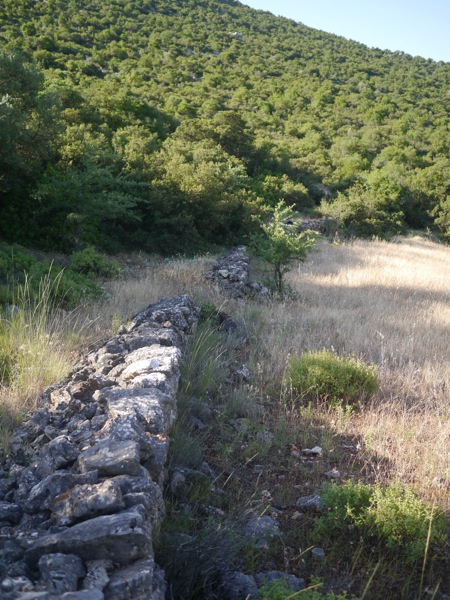 Near the elegant little kalyvi stood a similarly well-constructed mandra or animal pen. This animal pen crossed over a series of four small terraces. I suspect that animal pen was for goats. Its construction atop rather narrow terraces suggests the transition from growing grain on the steep and unforgiving slopes of the valley and using the slopes for grazing.

Further along the same slopes were a number of lovely pocket terraces for olive trees. I haven’t seen many of these in my wanders around the eastern Peloponnesus so it was pretty nice to see them in our survey area. 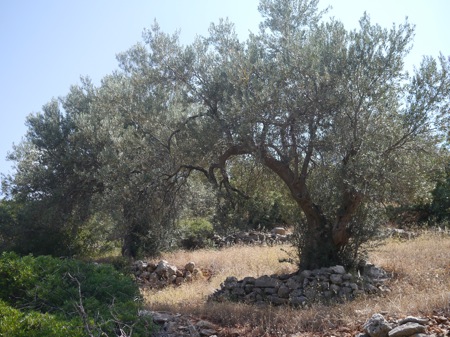 The other advantage of being on the Extensive Team is enjoying a peaceful sunrise through the maquis.

Or over a lonely olive tree.

Snack-time views aren’t bad either. Note the cypress trees associated with the kalyvi in the center of the photograph.