Today was our third day of field trips. We hit a series of minor and major sites on the Argive plain. Just like last Saturday, we started local, with the pyramid in the village of Elliniko and the church of the Zoodochos Pigi at Kefalari. Both are within 10 kilometers of our home base of Myloi. The pyramid is an interesting site, because although it’s almost certainly a 4th century tower, it has been claimed to be 5,000 years old, which would make it older than any pyramid in Egypt. Needless to say, we were somewhat less than enthusiastic about this interpretation.

The church of the Ζωοδόχος Πηγή is a beautiful church built into a cave just above the springs at Kefalari that feed the Erasinos River. In antiquity, these springs fed Lake Lerna, which occupied much of the territory between Myloi and Argos that we drive through on the way to work each morning.

Then we crossed to the eastern side of the Argive plain and went to Tiryns, the Mycenaean citadel whose walls are so magnificent, Pausanias (9.36.5) the travel-writer of the 2nd century AD claims they are no less marvellous than the pyramids of Egypt. It’s difficult to capture how massive they are in a photograph. 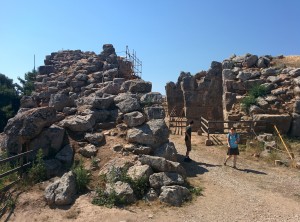 Tiryns makes for a nice counterpoint to Lerna, in that like Lerna it was a major Early Bronze Age center. Beneath the Late Bronze Age remains is a section of a massive round building with a tiled roof, commonly interpreted as an enormous granary(left). But the famous walls of Tiryns date to the mature Late Bronze Age, commonly known as the Mycenaean period. It’s unclear how Tiryns related to its more famous neighbor to the north, Mycenae. Some believe that Tiryns was ruled by the wanax (the king) of Mycenae, and that Tiryns functioned as a secondary center of administration and as a port town (the coast was considerably closer in the Bronze Age). Others think that Tiryns was an independent center. Our survey area, although it’s in the western Argolid, may shed light on some of these issues of political geography. The co-directors of the Nemea Valley Archaeological survey have argued in print that Mycenae expanded into the eastern Nemea valley in the Late Bronze Age. But what about the western plain? Our survey area is rich agricultural land and would have been attractive to Late Bronze Age leaders seeking to expand their authority. The southern part of our survey was probably under the sway of Argos in the 1st millennium, but what about the end of the 2nd millennium? These are very much open questions, and ones that we would like to address in our survey.

From Tiryns we went to the most important sanctuary in the Argive plain: the Argive Heraion. 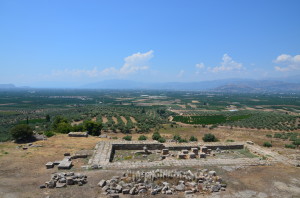 This sanctuary of Hera was much celebrated in antiquity. It is where the famous story of Kleobis and Biton took place. Agamemnon was selected as leader of the Trojan expedition here. Io was reputed to be the first (or second) priestess at the sanctuary, and in fact Hellanikos of Lesbos constructed a chronology of Greek history from a catalogue of the priestesses of Hera, one that Thucydides makes us of.

The Argive Heraion is a really nice site. It’s easy to understand, it’s famous, it affords wonderful views of the plain, and it’s free. Bill Caraher suggested that it’s one of the top three archaeological sites in all of Greece. I demurred, but agreed that it was very underrated. That led to a spirited discussion of the most overrated and underrated Greek archaeological sites. Maybe we’ll come up with a list one of these days.

Only two sites remained. On our way to Nafplion, we stopped at the small church of the Dormition at Merbaka (Ayia Triada), which is variously dated to the 12th century AD (Megaw) or the late 13th century AD (Sanders). The chronology makes a big difference: if the church dates to the 12th century, then it’s a Byzantine church with some western elements. If it’s 13th century, then it’s a church built by William of Moerbeke, a Latin (Catholic) Archbishop; this raises the question why the church was built the way that it was, and why the spolia (earlier architectural elements) were incorporated into the church the way that they were:

Our final stop of the day was Nafplio and specifically the archaeological museum in the main square of the city. It’s a magnificent museum, recently designed, and wonderfully presented. And it just happens to be located in one of the best tourist destinations in Greece, so we left the students in Nafplio to enjoy lunch and its many attractions. 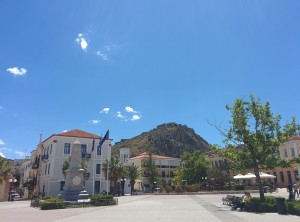