Over the past several months, a couple of different people have asked me why I like survey. My initial response is always intellectual. I talk about the importance of understanding the countryside, about the urban bias of our texts and excavations, the approach of books like The Corrupting Sea, and so on. In both cases, that wasn’t the answer that the questioner wanted. What they wanted to know was, why did I like getting up before dawn to wander around the Greek countryside for six hours or more over six+ weeks?

Strangely, that’s a more complicated answer. As a student, I wasn’t immediately drawn to archaeological survey, although I was of course exposed to it as an undergraduate at the University of Michigan, especially in the classes that I took from Sue Alcock and John Cherry. I first got seriously interested in survey because of the senior thesis that I wrote on settlement and state formation in Minoan Crete. I knew that I was interested in state formation (thanks to classes with John Cherry and Kent Flannery) and I knew that it was too big a topic for an undergraduate thesis. So I had spent the summer reading Colin Renfrew’s The Emergence of Civlisation (1972) — a book, incidentally, that convinced me that I wanted to be an Aegean prehistorian — and went into John Cherry’s office with a list of areas that interested me. One of them was settlement, and that sealed my fate: I ended up writing my thesis on published survey data from Crete from the Bronze Age, with a focus on the relationship between settlement data and state formation.

So my initial interest in survey was based on thinking, not doing. I had done survey for two weeks in Tunisia on the Leptiminus project back in 1995, and I liked it, but it wasn’t immediately my passion. But my intellectual interest in landscape and settlement led to me working on survey projects as I entered graduate school, both on the Iklaina Archaeological Project and especially the Eastern Korinthia Archaeological Survey.

So that’s part of the story… but the way that I’ve told it might suggest that I like survey as an intellectual and analytical activity but not in practice. That’s not the case. So when I’ve been asked why I like to get up before dawn and wander around the Greek countryside, I tend to talk about a couple of different things:

(1) The Greek landscape is really beautiful. I won’t ever get tired of looking at this: 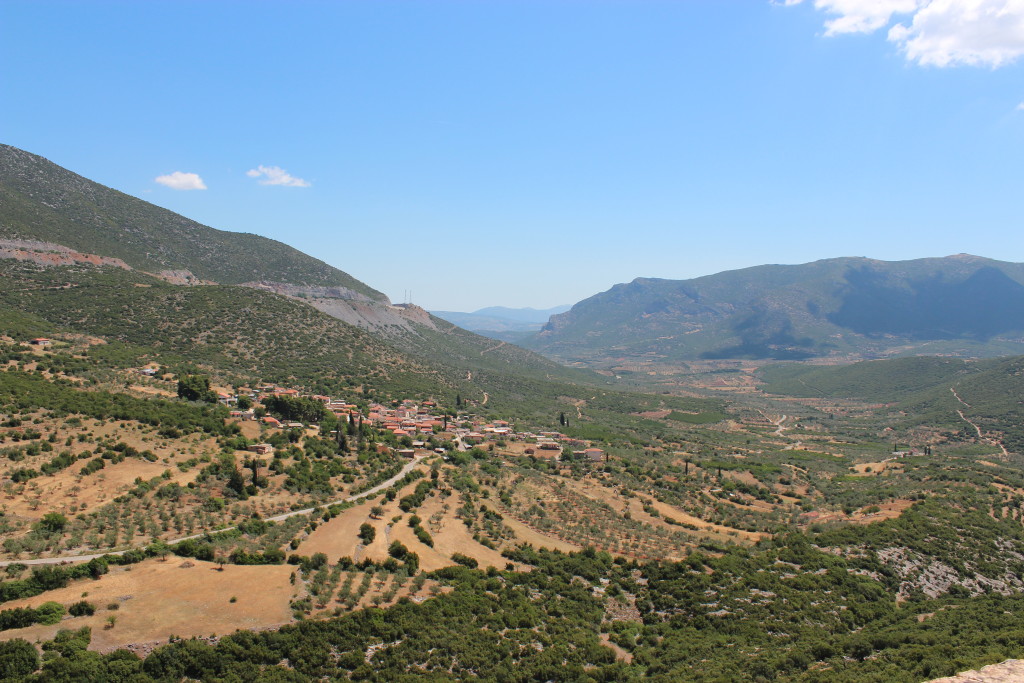 And this isn’t even the most iconic form of the Greek landscape (the deep blue Aegean up against the painted white houses of the Cyclades), but it’s still wonderful and variegated. Some of my favorite moments in Greece have been driving around a corner to be greeted to a wide and beautiful vista (the road to Kato Zakros in Crete is one of the best).

(2) The Greek landscape is endlessly surprising. This is true both generally — there are so many beautiful little valleys and harbors in Greece that you could spend your whole life visiting them — and in particular — walking through a familiar landscape will yield all kinds of little surprises.

(3) I love to explore and to hike. Loving survey is about embracing that spirit of exploration: of wanting to hike the trail that you haven’t yet hiked, not knowing where it goes. It sounds cheesy, and it is, but to love survey I do think you need to want to hike up to that hill in the distance to see what’s there.

This will sound familiar to veterans of the American School’s regular program, which involves a lot of hiking up to hills to see what’s there. When I went to Priene on the Ionia trip led by John Camp, my first thought and first question to John was, “Can I hike up to the acropolis?”

After being asked why I liked survey and giving these three responses, I started to wonder where (3) came from. Why do I have this strange desire to hike up to hills and mountains to see what’s up there? Was it drilled into me at the American School? Or does it come from somewhere else?

Thinking back on it, I spent an awful lot of my childhood hiking up hills in Greece. Most of my father’s family never left Greece, and so my summer vacations as a child involved going to Greece to visit my uncle, my cousin, and my grandparents. And Nakassis family vacations basically involved eating, swimming, and wandering up to hills.

Doesn’t it look like I’m having a great time? We wandered up hills like this one, with world-famous, UNESCO World Heritage archaeological sites on them, but we also hiked up to castles (like the Frankish castle above Voidokoilia beach, which we did without bringing any water with us!) and also up mountains with nothing on them at all, like when we were on vacation on Kos and Lesvos.

I do think that there’s something to this idea, that I like survey not only for intellectual reasons that emerged from my undergraduate education and my exposure to professors who were and are passionate about the ability of survey to shed light on the ancient world, but also because it involves a bodily practice and a bodily engagement with the Greek landscape that is almost literally hard wired in me from years of childhood vacations with my family. I managed to turn vacation activities into serious research. I’m not too upset about that.